As an Amazon affiliate, we earn from qualifying purchases. Please see Affiliate Disclaimer.

You are in the right place if you are looking to purchase a Surge Protector vs. Power Strip but somewhat caught in the middle?

But wait, let’s make something clear…

At a glance, these two devices are similar to each other. Both the power strip and surge protector consist of a plastic case with a certain number of outlets and a cord with a plug for connecting to the power supply.

The consumer thus has a very reasonable question: “Why pay more if you don’t see a particular difference between these two devices?”

How do you differentiate a surge protector from a power strip?

The difference between an extension cord and a surge protector lies in the internal content of these devices :

For example, you need to plug in a power tool to work on a balcony, yard, or other location where there are no fixed power outlets nearby. In this case, an ordinary extension cord will be the perfect solution to the problem. The only thing you need to pay attention to is the correspondence between the power of the extension cord and the total power of the connected electrical appliances.

It is thus recommended to use surge protectors to connect one or more stationary devices. For example:

It is essential to understand that the use of surge protectors does not exclude the use of UPS devices or voltage stabilizers in the network.

Can I use both a surge protector and a power strip?

As noted, surge protectors are essential to protect your domestic electrical devices against overvoltages, lightning, and any fluctuations on the electrical network (voltage drop and peak, short circuit). Yes, they can be used with a power strip. Combined, they offer real security and protection.

Maintaining a stable and constant electrical voltage to the nearest volt on a network is technically very difficult. Most appliances in the house would work very well and are safe when there are minimal voltage fluctuations.

However, the overvoltage may occur and is consequently poorly accepted by your devices (mainly electronic). This has nothing to do with a thunderstorm, lightning, or any other electromagnetic phenomenon, and can happen at any time! Your electrical and electronic devices are, therefore, always in danger.

To protect them as well as possible, you must, therefore, equip your power circuits with a surge suppressor device. You have at your disposal a whole range of different solutions, whether it is a pure surge protector to protect a single socket or it is a multiple socket surge protector.

When you have to choose your surge protector, several criteria and characteristics must be checked:

What is a surge?

A power surge is a temporary increase in electrical voltage. When an electrical device receives too much energy, it has a high chance of literally burning out. It does not necessarily mean that there will be flames and the start of a fire. Still, the wires/tracks it contains are not being sufficiently sized, they overheat and end up destroying themselves, which, as you can imagine, is never desirable for electronic equipment.

By analogy, you can compare overvoltage to too high water pressure in a pipe; depending on the strength and the duration of the overpressure, there is a good chance that the tube will give way.

Can a surge protector protect against a lightning strike?

A distinction must be made between overvoltages and voltage peaks. Surges – they last for more than three nanoseconds – are frequent and generally small. For example, the network that delivers 255 V instead of 230 V. Voltage peaks (2 nanoseconds at most) are rarer, but usually much more violent and dangerous.

The case of a nearby lightning strike can produce an electric current of several tens of thousands of Volts and Amps! Several surge protectors protect against overvoltage peaks of up to 6000 V. This is more than enough to prevent fluctuations in the electrical distribution network and even to overcome the impact of neighbouring lightning strikes.

On the other hand, if lightning strikes your home, likely, this protective measure is not enough as the discharge is fast and of high power (up to millions of volts and joules!). To protect your electrical installation from such a scenario, you must install a surge arrester on your roof.

This is a metal spike placed on the highest point and which will attract lightning and redirect the electric current directly to the earth.

Can everything be protected with a surge protector?

Almost. Any household electrical appliance can be plugged into a multiple surge protector socket as long as it does not consume too much energy. Generally, these outlets support 10 to 16 A, or 2300 to 3680 W. That does not pose a problem, even for a washing machine or vacuum cleaner!

Only electric hotplates exceed this power, but they are anyway connected to a dedicated electrical circuit, and not through a standard wall outlet. The same goes for electric heaters, although the power of the latter (from 500 to 2000 W in general) is not too high for surge protectors. 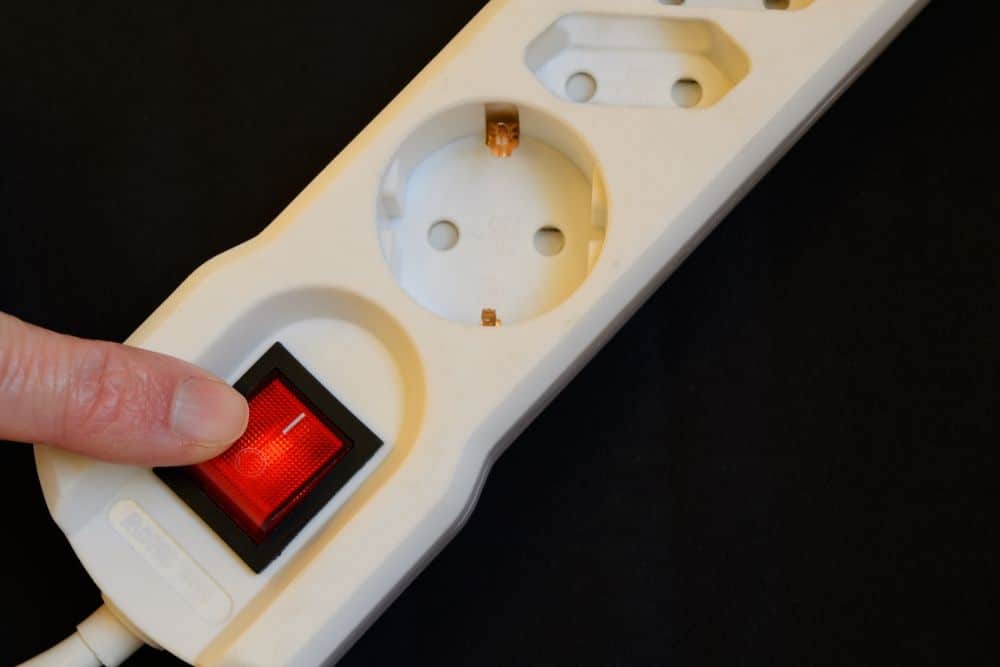 With the proliferation of our electrical devices, it is common to lack power outlets! A quick and straightforward solution to implement and to equip yourself with is one or more multiple sockets.

A strip, whether fixed or extended, allows from a single power supply to provide more outlets available. The advantage of a power strip is that it avoids any modification to the electrical circuit – by pulling cables or installing an additional socket box.

The installation of multiple power strips must be well thought of as it is necessary to avoid swarms of sockets. You must also work in accordance with the electrical protections of the concerned circuit. You must not overload a network. Otherwise, the fuses or the circuit breaker may blow.

Depending on your needs, you have several possible solutions –an extension box power strip (which plugs into a conventional power outlet and offers the possibility of connecting several devices). Or a fixed power strip (which from a single supply of power supply provides several socket holes).

When choosing your power strip(s), pay attention to the different standards! The CE marking or its equivalent guarantees that the equipment meets the safety requirements in force.

Here are a few things to consider before making your final pick:

Usually measured in joules, the energy absorption/dissipation is the primary feature to consider before you hit the “add to cart” button. Here’s why: It gives a clear indication of how much energy the surge protector or power stripe can absorb. Higher rating equals better results. We strongly recommend you within the 200-400 joules range.

When you buy a surge protector or a power strip, you, first of all, choose several outlets. While there are single-outlet surge protectors and power strips (handy for use with a single device like the washing machine), most models usually have 3-10 outlets to accommodate everyone’s needs.

As long as you don’t plug in several large appliances at the same time, don’t be afraid to use all outlets at once.

To equip oneself with extension outlets is to be taken seriously. Compliance with standards is the first step in this direction. The presence of the CE logo (European Conformity) or its equivalent in your country is, therefore, a good thing.

This is all the more important since, in the event of a possible fire caused by a socket, an insurance company could refuse the coverage in the absence of one of these certifications.

Some models offer additional functions. For example, there are units with RJ-11/RJ-45 sockets to protect against surges that could occur in the event of a storm via the telephone network and damage your internet box, for example.

In the same genre, some multiple sockets also protect the TV antenna if lightning strikes your house and chooses this path to destroy your television. It is also not uncommon to come across various outlets equipped with USB ports to charge your mobile devices.

Finally, the big brands do not hesitate to support the sale of their surge protectors with a damage guarantee. This covers devices that are plugged into it if they experience a failure due to a surge voltage.

The length of the wire 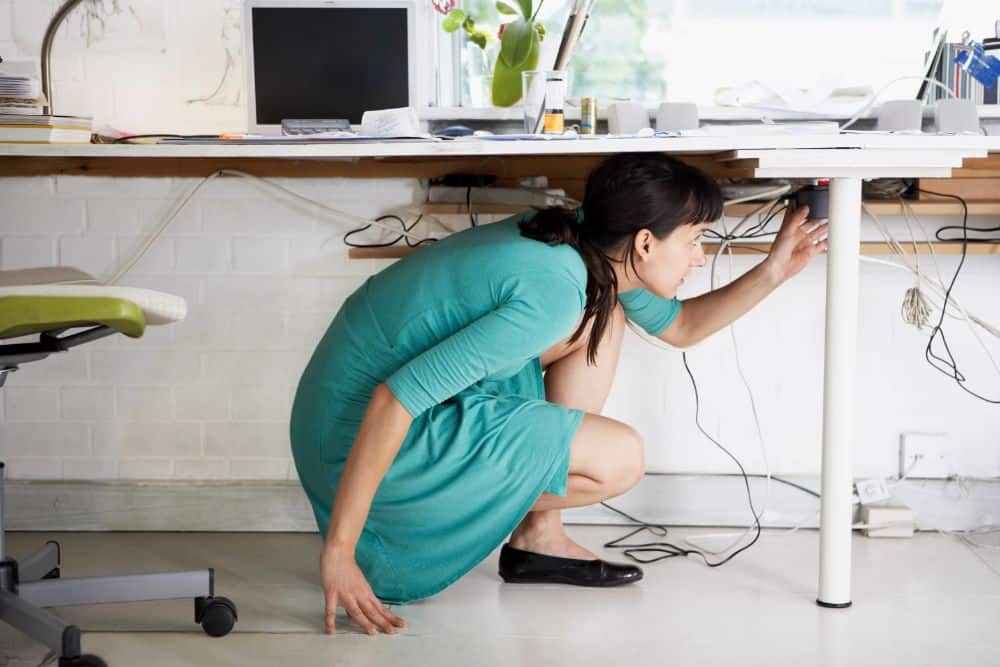 When choosing a surge protector or a power strip, pay attention to the length of the wire. As standard, these devices are manufactured with a 1.8-meter cord. Recently though, models of surge protectors and power strips with non-standard wire length have appeared on the market.

In any case, thoroughly study all the technical parameters of the surge protector before making your final pick.

When buying a power strip or a surge protector, be sure to pay attention to the degree of protection of the case from external environmental influences (indicated on the package). Devices with identification less than IP65 are not recommended for outdoor use.

There are also surge protectors for UPS (Uninterruptible Power Supplies). They differ in the “plug” connector and are connected directly to your UPS.

So, before purchasing any of these devices, you should decide on its purpose. A power strip will perfectly cope with the task of “transferring” the power supply point. Still, a surge protector is a more specialized device – and it must be used to protect equipment from interference and overvoltage in the network.

When buying a power strip or surge protector, pay attention to its operating power, since even the highest-quality device will not cope with its task when the permissible values ​​of this parameter increase.

It is also essential to know that under no circumstances should one surge protector be connected to another! Whereas extension cords are easy to cope with this task.

Possessing all the above information, you can reasonably choose the direction of your purchase of either a surge protector or a power strip. Or both!

Amazon and the Amazon logo are trademarks of Amazon.com, Inc, or its affiliates. As an Amazon Associate and participant of various affiliate marketing programs, this site earns from qualifying purchases by visitors.